Herding HTTP Requests, or Why Your Keep-Alive Connection May Already Be Dead

One of the more expensive things you can do on Android, or mobile in general, is sending and receiving data over a mobile network connection. Holding a dedicated channel in particular causes high battery consumption, as much as a hundred times more compared to being idle. Moreover, there is overhead on various levels when establishing a dedicated connection: First, it has has been shown that poor timing w.r.t. sending network requests can leave the connection in states with high power consumption before going back to idle, even when it’s not actively used. Second, establishing an HTTP connection, especially when using secure sockets (HTTPS), will result in a handshake being performed between the mobile client and the server, even when multiple requests are sent in quick succession. If no proper precaution is taken, these handshakes will occur N times when N requests are being sent, and your app will incur the associated extra cost of network traffic and battery consumption.

To mitigate these issues, it is generally advisable to batch HTTP requests whenever possible and send them over a persistent HTTP connection. This can be implemented using request queues (persisted or in memory) which are emptied at a given time using HTTP Keep-Alive. At SoundCloud we have recently implemented a tracking component which batches up a number of requests and flushes it in certain intervals to minimize the aforementioned overhead. However, we stumbled a few times when trying to make persistent connections work with HttpURLConnection, so make sure to double check your own implementation against the next few paragraphs or you may unwittingly send a large number of requests over separate connections, even when Keep-Alive is enabled. So let me break it to you:

HTTP Keep-Alive on Android does NOT just work

Fortunately for us, Android sets the Keep-Alive header by default, which a quick glance at the header fields of a newly opened HttpURLConnection shows. However, we were surprised to see that Android would still happily open new connections when using code like the snippet below:

Sniffing these requests with Wireshark showed that they were sent using separate TCP streams coming from different client ports (indicating separate connections.) Looking at the code, we’re not closing the connection until we’ve sent the last request, and we made sure Keep-Alive is actually set for every request, so what’s the problem here? 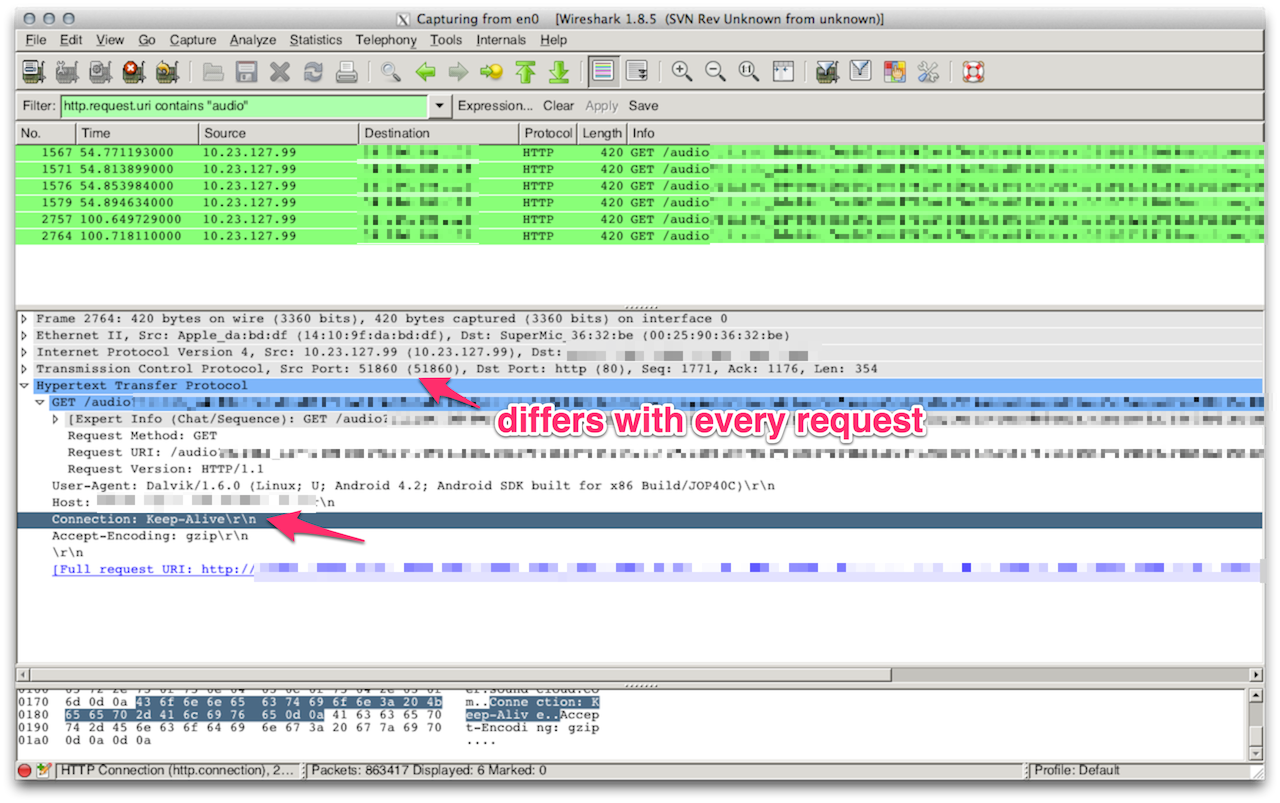 Apparently, in order to actually being able to reuse a connection, the implementation must know where one HTTP request on the same TCP connection ends and the next one starts. In our case, we weren’t interested in the response payload since these were fire-and-forget style requests, so we simply added a

as the documentation suggests. This, still, did not work for us. Again Android would not reuse TCP sockets but open a new one for every request; we haven’t found out why this is happening so please leave me a comment if you do. From here on you’re left with two options: You either fully consume the response payload, which you may want to do anyway depending on your mileage. This would mean reading bytes from the input stream until hitting the EOS byte. Alternatively, if you’re not interested in the server’s response, you should do as the document above suggests and send an HTTP HEAD instead:

Note that in this case, neither closing the input stream nor consuming it is required since there will be no response payload to read from. Returning to Wireshark, here’s what the communication with the server looks like now: 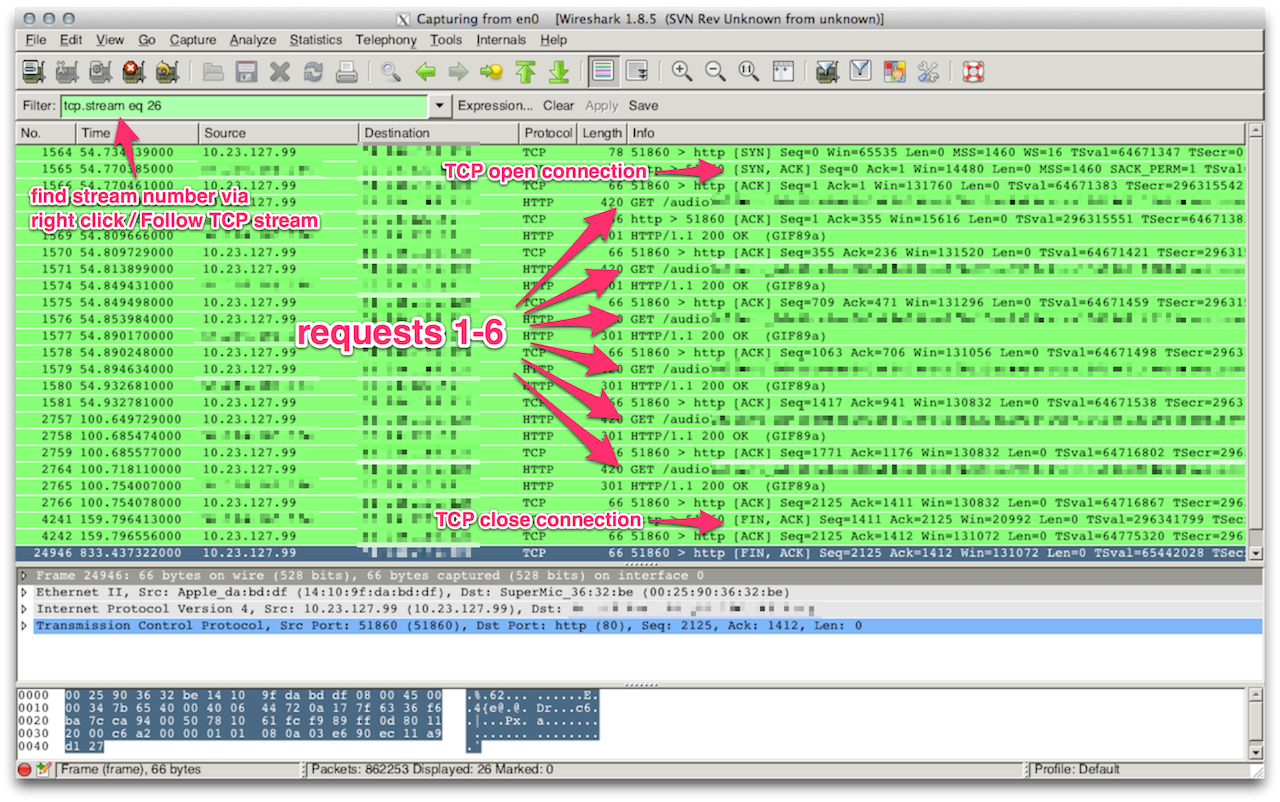 This is what we wanted to begin with: Client and server establish a TCP stream, then sending all six GET requests over the same connection. After doing our work, either the client or the server will terminate the connection by starting a FIN exchange. Here it is important to understand that calling connection.disconnent() does not guarantee triggering FIN. From the documentation of HttpURLConnection:

Once the response body has been read, the HttpURLConnection should be closed by calling disconnect().
Disconnecting releases the resources held by a connection so they may be closed or reused.

The emphasis here is on may: as you can see from the previous screenshot, it was the server that decided to terminate the connection at some point, and not our call to disconnect, since the first FIN is sent by the destination not the source.